I’m Thinking Out Loud about 10 of my favorite kitchen gadgets. And the super moon. PRing at a race I meant to use as a training run. Little body niggles.

Doesn’t get much more random than that! 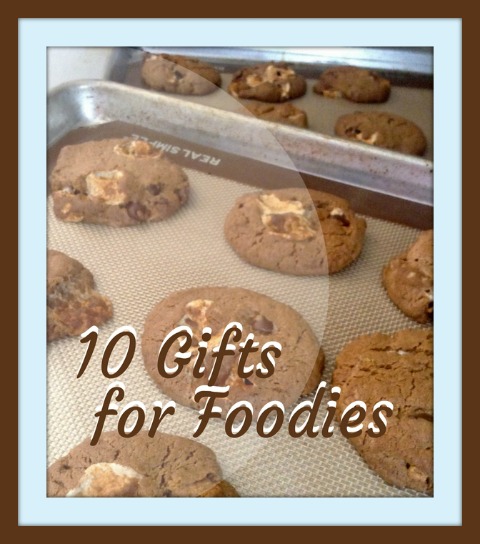 Soooo Sleepy
Was I the only one that had trouble sleeping the night of the super moon? I tossed and turned most of the night, and it didn’t much help that Giz decided to throw up a little grass right outside the bedroom around 2:30 am (but I’d rather he do it on the laminate than the carpeting on our first floor).

A holiday cleaner
Most people do spring cleaning. I do Thanksgiving cleaning. Because I have to to whip the house into shape. Because most of the time no one sees it.

Getting ready for Thanksgiving would be a lot easier without the decluttering. Will my house get just as cluttered by Thanksgiving of next year? Probably. I get on organizing kicks and then life gets in the way (or running).

Another epic failure
Did you read my race recap for Stockadeathon? If not, the short story is the plan was to use it as a long, supported run at race pace. Except I ended up PR’ing it (without trying to) at a pace that most definitely won’t be my race pace in my next half, unless FL gets a cold snap.

Clearly I really need to find me a half in the 40s!

I caved
My next half is a bit over 2 weeks away. Yesterday I added that city to my weather app. I was actually pleasantly surprised by what I saw, but . . . 2 weeks away!

But I have to mentally pack even if I want get to the actually packing for more than a week.

I hate that my body rebels
Seriously, I really try my best to give it what it needs — healthy food, a few treats, sleep (I did say try), movement . . . and yet I’ve had this on again, off again pulled muscle or something in my left leg the last few weeks.

Which meant I needed to take a few extra rest days this week. And missed out on running on the most gorgeous day on Monday.

Tis the season for giving
I will probably have a lot of running related gift giving posts coming up, but today, since our host blog is a cooking blog, and I do love to cook/bake, too, I’m sharing some of my favorite tools for the kitchen:

Joseph Joseph Elevate Carousel Kitchen Tool Set
Seriously the best, because you don’t have to lay them flat on your counters and get food all over your counters. I gave a set to my mom, too, and she even moved them with her — she doesn’t cook a whole lot anymore and there are lots of things she didn’t move.

Cuisinart Mini Mate Chopper
After decades of use — no exaggeration — mine finally bit the dust. It still worked, but the plastic finally broke. I don’t use a garlic press — just a whirl in my mini mate, and presto! chopped garlic. Obviously it has many great uses (grinding herbs and nuts, for instance). In fact, you might want to get yourself two, so that garlic doesn’t overwhelm your nuts.

Magic Bullet
I can’t speak to the Nutribullet or the Ninja, having not tried them yet. I used my Magic Bullet to death — twice! Seriously, there are things it doesn’t handle all that well, but it’s great to make banana soft serve, to mix salad dressing, and a myriad of other uses.

It can struggle with harder ingredients like dates, for instance (unless well softened in warm water first), and that’s how I killed it the first time. Or so I thought. It was tucked away for years, and for some reason, I took it out one time and tried it and voila! It was alive.

Now it is going the way of my Cuisinart Mini Mate Chopper: plastic pieces are beginning to break off, and let’s just say it’s out of warranty and their customer service sucks. But it has been well used and served me well and I highly recommend it.

Vitamix
This is definitely a big list item, but I can’t live without my Vitamix. I’m not sure how long I’ve had it — at the very least 10 years. It’s beginning to get a bit long in the tooth, but it still works well.

I use it for smoothies, to puree soups, to make sauces, very occasionally as an ice cream maker, to puree cooked veggies. Anything that is too tough for the Magic Bullet goes into my Vitamix.

It cleans up well without having to ever go into the dishwasher. The only thing it doesn’t do well is small amounts of food.

Yes, it’s a big ticket item, but I highly recommend it for the serious cook. I’ve linked to a refurbished model to take the stink out of the price.

Real Simple Baking Mat
Gone are the days that you have to scrub your baking pans or waste parchment paper. I’ve been baking on this mat for years, and cleanup is easy breasy — I love it!

Ulu
Quite a few years ago we took a cruise to Alaska, and I bought one of the Ulus offered on the ship. There were such beautiful ones available in the towns we visited, but I didn’t want to spend a lot of money on something I wouldn’t use.

And I’ve been kicking myself for years for not buying one of the nicer Ulus. I’ll be honest — I don’t use it often, mainly because it has to be hand washed, and house cleaning just isn’t my thing.

Yet it is one of my favorite tools for chopping nuts and herbs. Obviously this is not the one I bought, but it actually looks a lot like it.

OXO Cookie Scoops
While I kind of wish these cookie scoops came in different sizes, I use them all the time. Over the years I have tried a variety of gadgets for creating drop cookies, and once I purchased this set I never looked back.

Spice Jar Spoons
You know how hard it can be to get a measuring spoon into a spice jar? This set makes it easy.

Long handle measuring cups
I have spent literally years trying to figure out the best way to store flours — and then the best way to get said flours out of containers without making a godawful mess. Mason Jars are my go-to storage vessels, and these scoops make it relatively easy to get at the contents. I just really wish this set came with a 1/3 cup spoon!

Mason Jars
As I wrote above, a few years back I fell in love with all things Mason Jar. And it’s an ongoing love affair. My family has gotten used to seeing a mason jar tucked into their refrigerator when I travel (usually with a salad inside, or maybe some soup).

I use them to store food, baking ingredients, lettuce for salads (it keeps longer that way), smoothies, I travel with them — they are just so darn useful. And I love the cool colors they come in, too.

Whew! When I decided to put in some of my favorite kitchen gadgets, I didn’t think I had that much to offer. But once I got started — boy, I could go on and on! Maybe next week I need to do some of my favorite baking ingredients — what do you think?

I hope you find something on this list that makes your time in the kitchen a little easier.

Disclaimer: All the links above are Amazon affiliate links. If you click through and buy using my links, I will make a small amount of money. And I thank you for that.

The Jack Chi
Bandit is supposedly a Jack Russell Terrier-Chihuahua mix. I don’t see the chi, but I definitely see the JRT. Mr. Judy found this link about that mix. A lot of it rang true for Bandit:

Bandit update
Things have calmed down a lot with Bandit. We are slowly giving him more and more freedom in the house, although I made the decision not to try him on the furniture (where a lot of problems with him began) until after Thanksgiving. We’ll have 6 extra people in the house, so seating is at a premium, not to mention I’ve no idea how he will react to everyone.

He is extremely attached to his bed by the couch. So I’ve tried not gating him in the kitchen a few times, and having him in his bed while I’m working in the kitchen. Only invariably I turn around at some point and find him curled up in Lola’s bed. On the couch.

I must say he’s pretty good about getting back off when I tell him to.

If there’s someone on the couch, on the other hand, he generally stays put in his bed. We’re working on his stay . . .

When we first got him, he would growl at random people and dogs on our walks. I haven’t heard him growl at a person in a long time. Or a dog, for that matter.

On the other hand, he has also gone ballistic when walking by yards with dogs running around in them (like Monday). I was trying to work on getting him into a sit — it’s a great training opportunity — when he yanked the leash so hard with his shenanigans that I spilled the tin of treats all over the road.

On Tuesday, however, when the beagle who is always starting something walked by, I had them both in a sit and they both did quite well. So obviously it’s the dogs running around free that is bringing that out.

I’d love to start him on some agility — it helped Lola a lot with that. Plus it’s great mental and physical activity for them. I just need to find something closer to home, as the trainer’s classes are not close and with winter closing in, I’d rather not have to drive that far at night.

He sure calmed down when I get very annoyed at him.

Talk to me. Tell me in the comments:

What kitchen gadget is a must have in your kitchen?

Did the super moon affect you?

How’s that Thanksgiving menu coming along?