You can have your Troy Turkey Trots, because even though I’ve never done it, I’m pretty sure I prefer the more low key (and free) Cohoes Turkey Trot. Here’s how it went down for the second year I’ve run it.

Packet Pickup
I got to the race earlier this year than last year. I knew that you could hang out in city hall before the race. More on that later. Walked over to the sign in table in the park, gave them my two boxes of soup, and got my bib.

The Plan: run by feel
Unlike last week’s Girls on the Run 5k, I had no PR aspirations and no plans to even watch my pace. Just move my body and put myself in a good mood for the rest of the day.

Yes, it was a PR – maybe? – and I wasn’t looking for one again. However, you’ll also notice that the pace is quite a bit slower than last week’s 5k and this race isn’t that much longer. And it seemed like maybe I didn’t press my Garmin at the same time or the course was somehow short (or maybe I just ran tangents better?). I am still totally satisfied with how both races “ran”. 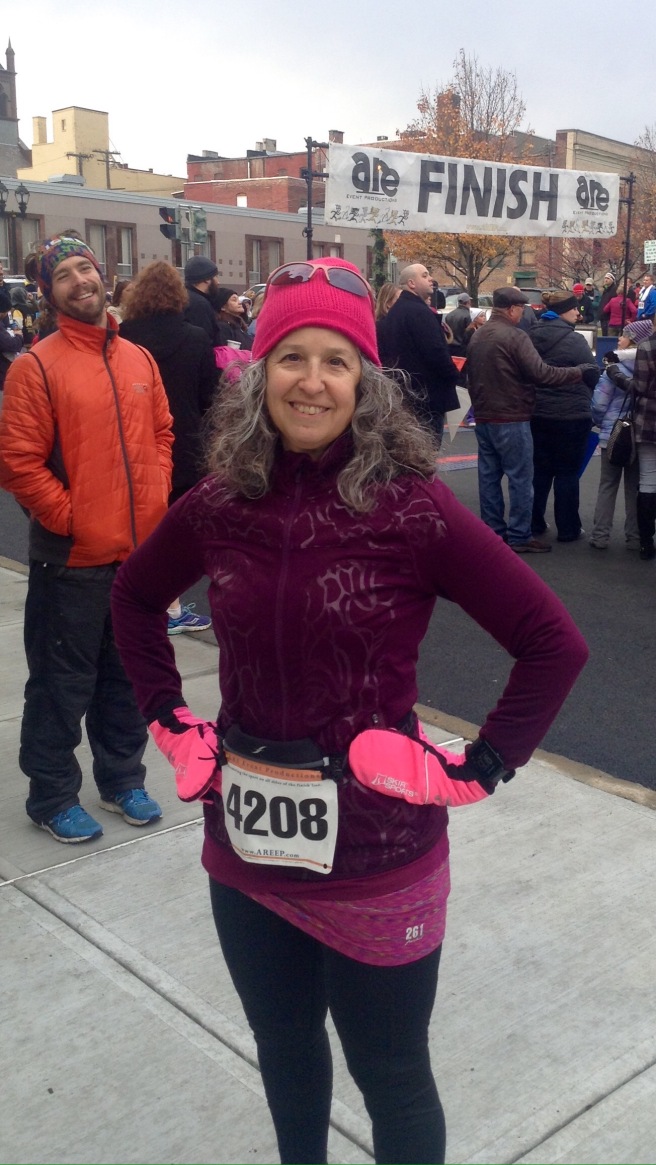 ﻿
The weather & dressing
It was much colder than last year, and for some reason this year, they didn’t open City Hall. I kept hoping maybe they’d open it at some point, but they never did. So I hung out in the cold for an hour.

I wore a fleece lined jacket from Fabletics, my Skirtsports Switzer capris (I guess they’re currently sold out — too bad, one of my favorites!), and the free flow long sleeved top. I also tried out the convertible saftey mitts — I was disappointed with the tech tips, I had a hard time using my Ipod with them. But they kept my hands warm (although the wind guards make my hands look humongous, and I actually have very small hands).

What I Saw/Felt
It was so cold that I had zero desire to take any photos (other than the one I asked my new friend to take of me). I happened to meet a guy as we walked to get our bibs, and we both headed over to city hall afterwards, thinking we’d wait inside. We went back to ask if it would be opened and where some bathrooms were!

There were some portapotties next to City Hall — and no lines — so I just used them. Later there would be a small line.

My new buddy left at some point, and I struck up a conversation with a woman who somehow looked familiar to me. We had a lot in common: started running late in life, run for stress relief and weight management, and her son went to the National Technical Institute for the Deaf (which is at my alma mater, RIT). We kept chatting and eventually the same runner came back — wouldn’t you know they were friends?

I eventually left to warm up, which included some jogging back and forth because I was just so cold.

Last year I thought we ran past Cohoes Falls, but never actually saw them. This year I did. While I love the downhill finish, a lot of it is on the sidewalk, as the streets are narrow and the route not closed to traffic.

In fact, at one point I was running in the street, and this car was driving on that side of the road. And it just kept driving slowly along with us — I found that incredibly annoying (and potentially dangerous).

I also realized that the part of the race that is on the bike path is actually a portion I have run many times. I choose not to run there real often, as it’s a decline out, and an incline back — but we were heading in the direction of the decline.

Was the race well run?
It’s free, y’all. You can get a tee if you pay for it. Getting my bib was easy. Where the start line actually was? Confused everyone. There’s one water stop and they hand out small bottles of water. Sort of nice, except then you have to carry them with you. I think last year I just didn’t take one. This year I did, drank some water, and put it in my pocket for the rest of the race.

There’s not a whole lot of food post race, but there are some protein bars and other snacks. In the end I didn’t take anything — it’s Thanksgiving, after all, and I had plenty of food waiting at home!

For a free race that’s meant to be a fun run to get the whole family moving (there are multiple kid races before the main event), it’s very well run. I’ll probably be out there next Thanksgiving.

Final Thoughts
I’ve never tried Troy, even though I know plenty of runners who do it. Because Thanksgiving is always a hectic day for me, I prefer my turkey trot to be more low key and close to home. Free doesn’t hurt either.

I also don’t really want the secret to get out . . . I like practically rolling out of bed to go and race — that almost never happens!