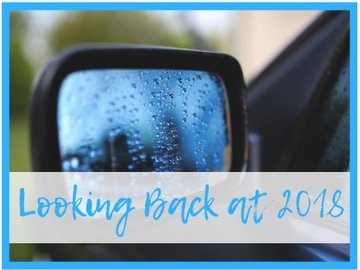 2018 was just not a normal year. Normally I start the year with a short race on New Year’s Day — I’ve been doing this race for seven years! Depending what time you’re reading this, I’m either hanging out before the race, racing, or have just finished racing. The race was canceled in 2018 due to extreme cold. It had definitely been cold before, so just imagine how cold it must have been!

I usually wrap up the year in November with lots of racing too — guess what? Most of the races I wanted to do were canceled due to weather — again!

My title graphic is totally appropriate: the weather was just not normal. Very cold in January, then lots of snow — but it would warm up and all melt, then dump more, and warm up . . . and so on. Pretty much no Spring and right into an early, unusually hot, unusually humid summer. We mostly skipped Fall, too, and heading right into winter with unseasonably cold weather. And it rained . . . so much.

18 in 2018
Has a nice ring to it, doesn’t it? I thought so. So I signed up for the 1812 Challenge (read about it here) and trained for and ran my longest race ever. Despite the chilly start and end of 2018, the summer turned out to be one of the hottest and most humid on record. Of course.

A big shout out to Coach Rachel @ Runningonhappy for coaching me through 18 miles!

But first let’s run down a mountain
I had a goal race to tackle before running 18 miles, though — literally running down a mountain in ID (read about it here). That was my only half PR of the year, but it was hard fought, and let’s just say the race itself was a total cluster — not the least of which was no medals, my first pitstop most likely due to some mild food poisoning, and a race company that folded up not long after the race.

Despite the food poisoning and not really being able to eat much at all after the race, except, ahem, a baked potato – in ID, naturally — we had a great vacation and I really enjoyed running all over ID and a bit of hiking, too.

And then the ocean
The Ocean City NJ Half had been on my radar a long time. I wanted to get through 1812 before pulling the gun on it, though. That’s 3 long distance races in 3 months’ time, after all. I felt good, though, so away we went.

Let’s just say I don’t seem to have good luck with ocean races (the exception being Panama City Beach 2 years ago). It was a warm day with lots of sun and not my worst or best performance, for sure (read about it here). I enjoyed my time by the ocean, though.

Finally, let’s run through a Nor’easter!
Another Ocean Half. A beautiful day before and after. And a literal Nor’easter the day of. Still one of the most fun races I’ve run due to the brilliance of having a different color bib for AMR retreat participants — the non runners and the runners alike cheered everyone on. It was awesome (read about it here)! And of course I got to share the experience with Running Buddy J.

There were a few PRs & more local races
My half PR streak may have been broken, but I pulled in a few PRs and was even 2nd in my AG in one race (but they only awarded first). Sometimes I was way in the BOTP, sometimes I moved up into the MOTP. In 2018 I ran:

More friendly racing
I headed out to many races with friends. The cast of runners changed all the time, but most of the time I was with a group of friends, which always makes it more fun. I even managed to run into someone who’d commented on my blog during the 1812 Race, and we ran together several miles — thank you Dina! I hope the rest of your running year went well (we didn’t keep in touch, although we had so much in common!).

On the personal front
It was a tough year in many ways, with much ongoing drama that won’t be going away anytime soon: unhappy elderly parents; Gizmo’s kidney failure diagnosis; Lola’s Lyme Disease and Bronchitis and heart scare (she’s fine!, thank goodness, one sick furkid at a time, please).

Ending on a high note
2018 may have been challenging, but it also included 2 trips near the ocean, more hiking through the beautiful mountains of ID — giving me my Sound of Music moment, many cuddles with the furkids and LOL moments at their antics, runs and races and get togethers with friends. And food, of course. Lots and lots of good food.

Always look for the silver linings — they’re always there!

What are you looking forward to in 2019?

And last, but most definitely not least, a fond farewell to Tuesdays on the Run. Thank you Marcia, Erika, and Patty for giving us such a wonderful space to hook up and link up with other bloggers every week.  Thank you for all your hard work.