I’m Thinking Out Loud about all the good things in my life. It’s all in your perspective. I was sitting here working on the computer yesterday when snap! The lights (and computer) went off.

Which just reminded me of all the ways I’m so very lucky:

Moving on to the rest of my TOLT.

Sitting is damn tiring
I wrote about being energetic yesterday, but Saturday we drove down to the Culinary Institute of America for my Dad’s birthday lunch, and basically the rest of the day was spent sitting.

So glad I got in an easy run the next day before the next round of sitting began!

It’s nice to run without . . .
Using up a roll of tape every time I run! Okay, that’s an exaggeration, but I was going through lots of tape there for a while. Now I only tape my left IT band for a double digit run or a very hilly run, and even that hasn’t been bothering me since my sports massage.

Queen Procrastinator
Passover starts tomorrow night. We don’t get together with anyone. My mom asked if we wanted to come down, as it does fall on a weekend this year, and if we hadn’t just been there, I probably would have said yes.

I asked her if she’d rather see us for Passover or Mother’s Day. She chose Mother’s Day; good thing, too, as Passover would have messed up Mr. Judy’s plans for this weekend.

So, we don’t get together with anyone. We don’t have a seder, although we do keep to the spirit of the holiday: no bread, pasta, or popcorn. But we always go out for sushi, which is technically not kosher for Passover unless you’re Sephardic Jews, which we aren’t.

As I said, we keep to the spirit of the holiday!

Since I eat gluten free a lot, and sometimes Paleo, it actually isn’t too hard to come up with things to make. I never find it as hard as a lot of people make it out to be, but that might just be because I bend the rules a wee bit.

We found the sunshine this week
Finally! Last weekend was gorgeous. We even had several warm days this week — almost warm enough to turn AC on (our house is a raised ranch, and our upper floor, where our bedroom is, heats up fast).

But I did it again . . .
When I got to the park, I saw two women running. One looked like my friend Jan. Since they were running, and I wasn’t sure, I didn’t wave or call out hello.

When we got home Jan messaged me and asked if I’d been wearing a big hat and walking Lola.

This week’s: I was in a rush to get out one morning and I started to put sunscreen on my lips! It’s a solid sunscreen, so it’s kind of like a big lip balm. But yuck!

I know it’s a good idea to protect your lips, too, but trust me — that wasn’t the way to do it.

Gizmo loves his beds
Although Lola is quickly taking over this bed. And I had to get a new one because after months, Lola decided she wanted to chew on the bed we had there. She’s already taking over the new one, but so far, anyway, knock on wood, she’s not eating it.

Do your furkids chew on weird stuff?

Does your power randomly go off?

Earth Day
I’m also linking up with the Thursday Throwdown, with Tamieka @ Fit Balling Running Mom, Sarah @ Cardigan Sarah, and Lex at Flecks of Lex and today we’re talking about Earth Day, which is tomorrow. 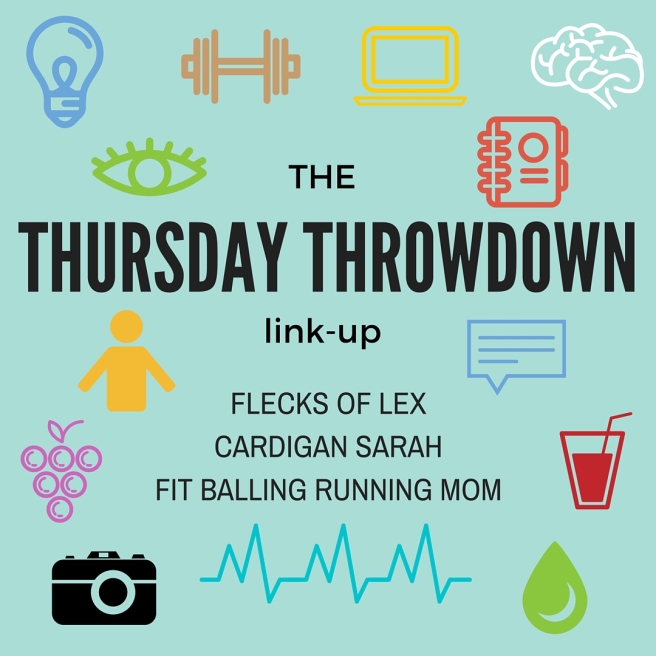 I’ll be honest: I don’t really pay much attention to Earth Day, but I do try to be kind to the planet every day, despite the fact that I don’t have kids so when I’m gone, I’m gone — but I think everyone has an obligation to do their part in taking care of the Earth — we’ve only got one!

I’m not perfect, but here are a few things I do:

Do you ever do anything special for Earth Day?