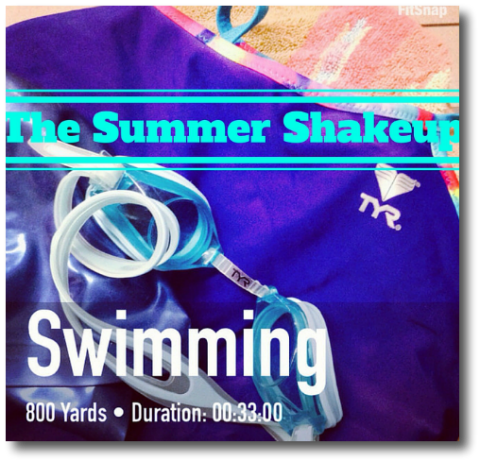 I am active year round, but I won’t lie, it just seems easier to be more active in the summer: longer days, warmer days, lighter clothes. Sometimes during the winter it just seems so hard to be changing into and out of fitness clothes, and as much as I love my fitness clothes, they just don’t keep me super warm, even inside, when it’s freezing outside.

During the summer, though, it’s really easy to change in and out of clothes. There’s more light in the evenings, and while I’ll never be an evening person, even I can get out for the odd evening workout now and again during the summer.

I’m talking about how my fitness changes in the summer for today’s Friday Five  from Cynthia from You Signed Up for What?, Courtney from Eat Pray Run DC, and Mar from Mar on the Run.

Swimming
I love to swim, I always have. In a lake, in a pool, everywhere except the ocean — I’m not overly fond of salt water (or jellyfish). One of my dreams is to have a house with an enclosed lap pool. We actually looked at a house like that up here, online — the house itself was a garish disaster so we never actually viewed it, but part of me wanted that lap pool so badly.

Daytrips
Darlene and I basically walked (with a bit of running thrown in) a half while we were in New York City. No joke!

I didn’t get quite so many steps in on our daytrip to Bennington, but it’s fun to explore on your feet.

We really hadn’t done much in the way of daytrips until this summer, but we often don’t take vacation during the summer (yet another FOMO opportunity for me), so this year I’m trying to switch things up a little.

Trying new stuff
I took my first in-store yoga class at Athleta after one group run. I’m eyeing either kayaking or a SUP class in the near future, things I keep saying I want to try, but haven’t yet.

I’m getting FOMO (fear of missing out) with all you kayaking and SUPing bloggers!

More walking
During the winter it gets dark so early I can’t walk with Lola and Mr. Judy in the afternoons. I try to get us out a few times a week after dinner during the summer.

During the spring, before it heats up, I’ll often take Lola for a couple of shorter walks a day. One in the morning, and one in the afternoon to get the mail.

That’s my go-to suggestion for people who want to get more steps in: get in a dog! Or visit a shelter if you don’t have a dog — they almost always have a dog walking program and it’s a win-win for both the people and the dogs.

Splitting up my strength training
It doesn’t always happen, but in the last few weeks I’ve been trying to do shorter sessions of strength training on most days by doing upper body one day, lower body the next, and abs most (but not all) days.

Talk to me. Leave a comment or answer a question:

Have you tried a new fitness activity you love recently?

Do you find it easier to be active in the summer?

What is the best thing you have eaten this week?