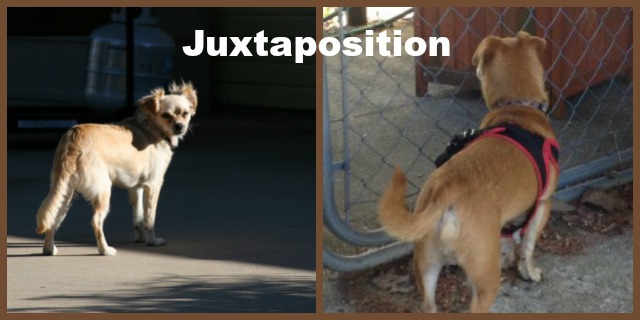 Juxtaposition: the act of contrasting two things by placing them side by side.

I find myself calling Bandit, our new dog, Chester a lot. I never called Lola Chester; not since he’s been gone, anyway. I think I did the whole going through every furkid’s name til you get to the right one thing while he was living a lot. At the time we had two cats and two dogs.

And I can’t help but compare Bandit to Chester. In many ways, he reminds me strongly of Chester, and yet he’s very different, too — in both looks and personality.

I can’t help but compare them in my mind’s eye. They both have that solid male body, with a wide chest and while Bandit is tan to Chester’s much lighter fawn color and they actually look quite different (Bandit being short haired to Chester’s long hair), yet there are similarities there, too — the floppy ears, the curved tail, the dark brown eyes.

Or maybe that’s just the exhaustion of folding a new furkid into the pack and, once again, finding a new normal.

Comparing Personalities
Then there’s the juxtaposition of their temperaments. Except at first, when he was a puppy, Chester was not a high energy dog. He couldn’t be, with a severe heart murmur and then heart failure.

Chester loved to be held like a baby. Seriously, he’d just lay there in my arms forever; that’s how I often calmed him down when he was a puppy or when he was barking; we joked that holding him like a baby was his “off button”.

Bandit, on the other hand, is a high energy dog. Once he’s tired out and the house is quiet, he’s happy to lay somewhere . . . until I get up. Again, Chester was that way, too. Always following me around. Guard dogs. Yet another difference between them — I might be able to run with Bandit once it cools down. I’m doing just a little running with him now, and he seems to enjoy it. Unfortunately I can’t run with Lola, so I’m still stuck walking dogs every day.

Bandit was rescued by his previous owner in the truest sense of the word; she couldn’t bear to see his first owners neglecting him and asked if she could have him and basically they just handed him over. He was probably abused by that first owner. He is slow to warm up to people, especially men — although he seemed to take to us pretty quickly, which is how his owner knew we were the “ones”.

But after nipping Mr.Judy when he tried to pick him up that first day, I still don’t know if I can pick him up. We’re so used to carrying our dogs around, and it has its benefits, like when we carry them into the garage to put them in a car (because I don’t want them thinking they can just walk into the garage, way too many things there that are dangerous for them).

Don’t get me wrong, we do not treat them like babies and they walk on their own four feet every day. Just having a small dog and sometimes being able to carry them has its upside.

I worry a bit how he will be when we bring him to my parents, or if we should bring him to my parents. Typically we bring Lola with us because otherwise we have to pay for a pet sitter. But my Dad uses a cane and he can be a bit rough with Lola — like the last time I was there, he took her snout as if she were a child and he was doing “got your nose!”. She yelped, but didn’t do anything, but I don’t think Bandit would tolerate that at all.

Juxtaposition Old vs New
It’s never really a good thing to examine the juxtaposition between a new dog and an old dog, but you really can’t help but go there. As I mentioned in How Running is Like a New Dog, I was disappointed when Bandit went after Gizmo on just his second day here. But Chester and Lola certainly did that when they were younger, too; they were crated until I felt confident that I wouldn’t come home to beat up animals, and I’m fairly confident it’s just going to take time.

It’s unfortunately that even though Bandit has been exposed to crates, it’s clear that it’s not his favorite thing in the world and he’s very anxious even in just the short time he’s crated while I walk Lola (after walking him first to tire him out, of course).

Considering he just lost his person, though, it’s very understandable. Just frustrating for me!

Since I’m really just kind of rambling here, and my thoughts are doggy this week, I’ll leave you with this quote and hope some other bloggers come up with more scintillating posts:

I’m always trying to find the ‘connections’ between things.That art is the juxtaposition of a lot of things that seem unrelated but add up to something recognizable.
— Pat Metheny

What things make you look for juxtapostions?

Do you find yourself searching for similarities between old and new furkids?

Is it comforting to find those kinds of connections?

19 thoughts on “Juxtaposition: Searching for Connection”