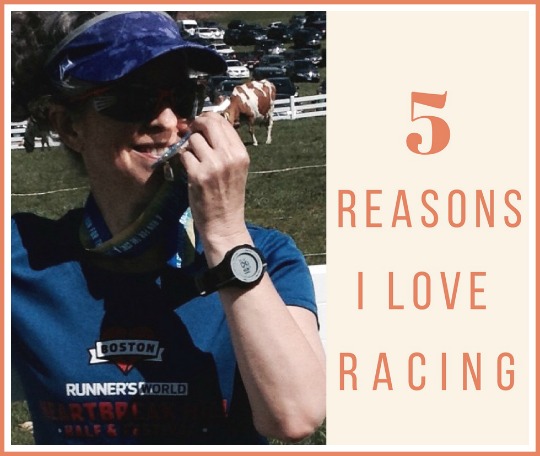 So the proverbial you gotta do you.

Today I am joining up with the  Friday Five 2.0  from Fairytales & Fitness and Rachel @ Running on Happy to talk about 5 reasons I love racing.

Some racers just wanna have fun, and that’s fine. They’re out there and they’re still challenging themselves and they’re doing something good for their body.

The Atmosphere
Want to get yourself out of a funk? Volunteer at a race (which is a do as I say, not as I do). The atmosphere at a race is electric. It’s part of the reason you train at a certain pace, but you race at a faster pace.

First time racers are almost always surprised that the pace that felt so hard in training feels so easy in the race (up to a certain point, of course, and all depending on what race day hands you).

Even if your race doesn’t go as you envisioned it, as long as you’re not injured, you’ll feel proud of yourself and you’ll be in a better mood at the end of your race.

Seeing New Areas
I’ve often seen more of an area than my husband when we travel, even long before I started to run. Because I’m a morning person, I’d often go out for an early morning walk while Mr. Judy was still snoozing. Course none of those walks were ever 13.1 miles.

Pushing Myself
Life begins, as they say, outside of your comfort zone. You gym rats? Most of you go to the gym because you work out harder than then you do at home. Same thing at a race.

It can be hard to push yourself on your umpteen cold or hot run — far easier when you are surrounded with a thousand or so of your new best friends, aka other runners.

Earning My Post Race Treat
Food & running: even for the non-foodies among us, food & running often seem to be inexplicably intertwined. Who doesn’t plan their post run/race recovery meal . . . before the run? During the run? Just me? I know that’s not true!

It’s nice to know that I can let my hair down (metaphorically & in real life) and eat what I want after a hard half.

So let me know in the comments:

Are you thinking about food on the road (and before, and after)?

What do you love about racing?

What is one thing you’re loving lately?

32 thoughts on “5 Reasons I Love Racing”