I’m Thinking Out Loud something very simple today: thank God for spandex! Have you ever eaten your way through New Orleans? If you follow me on Instagram (here), you know I sure did last week. I was a little afraid I wouldn’t fit into the only pair of jeans I brought, but spandex is our friend sometimes.

Since I just got back and you never know when you might end up in NOLA, I’m sharing the good eats we found. This will be photo intensive and drool worthy. You’ve been warned!

Food Tour
Food tours never disappoint us. It’s a good way to get your bearings, learn a little bit that you didn’t know, and eat good food. We had a fabulous time with Tastebud Tours and our guide Libby, who is a 10th or so generation NOLA native and has her own tour company, Lucky Bean Tours.

We started with the brisket po’boy at Tujagues, which came with a side of history about how po’boys came to be. It did not disappoint and that horseradish sauce can sure clear your sinuses!

I’m glad we got to try the Calas cakes, since I’d never even heard of them. I want to recreate these at home, although interestingly, the recipes I’ve looked up show them as fritters, not the cooked rice cakes we ate, which I really enjoyed.

I think the Muffulettas were actually the highlight of the tour, although all the food was really good. We ate them out on the riverwalk, which was a nice touch.

While our guide picked up our sandwiches, we got to explore The Spice and Tea Exchange — turns out this is a chain, which I didn’t know at the time. I bought some teas, naturally.

Our final stop was at Lara’s Candies for Pralines tastings; the store offered a 10% discount, and we always like to bring something back for our pet sitters, so we took advantage of the discount. I must have eaten my weight in Pralines while in NOLA — it seemed every store had their version out for tastings. Of course my favorites were the chocolate ones.

And that was just one day!

All.the.carbs
Well, I was there to run a half marathon, after all. I’m not sure that really justified everything I indulged in, but New Orleans sure does have some good food, baby. I think I heard “baby” a lot more than y’all.

One day we were both up early so I dragged Mr. Judy over to Cafe du Monde. We had been to NOLA once, pre-Katrina, but it was so that I could attend a conference (as a blogger, but not a running blogger, obviously) — so while we’d eaten at the Cafe Du Monde in the Riverwalk Mall, we’d never eaten at the original location.

I think we got there around 8 am and while they were somewhat busy, we were able to walk in, sit down, and be waited on, rather than having to stand in a crazy stupid line. There was a pleasant breeze coming in off the river and we enjoyed every bite (it’s cash only, by the way, although it’s also quite reasonable).

Mr. Judy had a groupon for Winks Bakery. They didn’t open until 9, and actually, they were having some employee problems, so it was a little later. And it was totally worth it.

Winks is famous for their buttermilk drops. What’s a buttermilk drop, you ask? A big donut hole. That’s what’s in the box. I wasn’t blown away by the original, but the flavored ones? Yeah, baby. That morning the cream puff was calling my name. It was divine, too.

Of course I had to carb load for my half, too. I took Tricia’s recommendation and we went to Big Pie Pizza. Even though I’m not really a fan of New York style pizza (despite having been born and lived most of my life in NY), it did not disappoint. We just got a simple cheese pizza and garlic cheese sticks (which have now guided me to 2 PRs — wish that could work every time!).

And then there was a lucky find up in the Garden District: The Rum House. We were just walking around in search of a mug for me, when we walked by this restaurant with what looked like amazing food. We walked on by . . . and then came back, and thank God we did, because the food was amazing.

We shared the Sweet Potato Crab fritters and the Jamaican Beef Patties, which were like empanadas. And then I had an amazing sweet potato beet goat cheese salad while Mr. Judy enjoyed one of their tacos.

If you get out to the Garden District, I highly recommend this restaurant!

Our last day in NOLA we walked around the Warehouse district a bit and I made a beeline for Bittersweet Confections. Some woman in front of me nabbed the last Chocolate Peanut Butter cupcake. The nerve of her!

There’s more to life than carbs
Another restaurant a couple of people recommended was The Ruby Slipper. So we went for brunch one day. It was a few days before my half, still, and I decided to be slightly virtuous and got Migas. They were good, but not quite like the Migas I was used to in TX. The portion was very generous, though, and I actually ate them for lunch the next day (yes, the day before my half!).

There were so many things to choose from, so many things I wanted to try. It wasn’t an easy decision. I’m not sure Mr. Judy really wants to go back to NOLA, but some day I’d like to!

I had wanted to try to eat lunch at Commander’s Palace, but it just didn’t work out. However, walking home one day, I noticed a restaurant named Sobou (a Commander’s Palace restaurant). I looked them up when we got to the hotel, and it got very good reviews. And for good reason.

I got the Boudin Balls and the Cracklin’ Crusted Yellowfin Tuna Tacos. So good. And then the Chocolate Coma Bar. I mean, seriously — how could I skip that? It was probably the best dessert we had in NOLA, which is saying quite a bit!

Go for the race, stay for the food!

Come run Utah with me
Don’t forget that code crj15 gets you 15% off of your registration for the Utah Valley Marathon (your choice of three race distances). The price goes up on March 2, so register today!

I’m running the half, and quite a few other bloggers will be racing, too.

Disclaimer: I make a small amount of money if you register using my code. 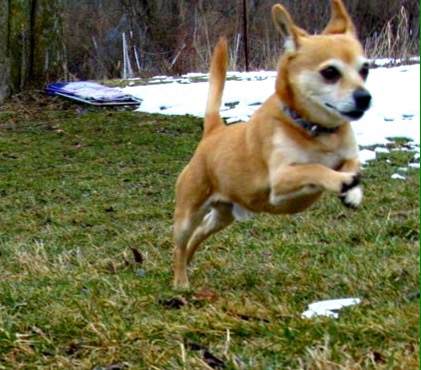 Bandit update
Well, obviously we didn’t see the furkids last week. Although Bandit’s pet sitter sent us this photo of Bandit — I cropped out the dog he was playing with. Apparently he got along great with a couple of the dogs there. We were joking that we have a gay dog (because he doesn’t play with Lola, who is dying to play with him).

Lola, OTOH, apparently helped herself to some hot dog rolls that were on a counter where she was staying. Thankfully she didn’t actually eat them — or have time enough to eat them, I guess — but she did nest with them.

I think next week I’ll be rounding up some of the stuff we did while in New Orleans.

Talk to me. Tell me in the comments:

Do you have a furkid that likes to bring stuff to their bed?

Any great NOLA restaurants to add?

Ever tried a food tour?