A quiet fourth, a fun race with friends, and more “hiking” on an easy trail. Despite more rain and humidity, the week ended on a high note with a beautiful day today.

I’m joining up with the Weekly Wrap from Holly @ Hohoruns and Tricia @ Misssipppiddlin and a guest host for the Weekly Wrap to share how I’m enjoying my summer: is being active making your summer more enjoyable?

I’ve been running the Firecracker 4 race on the fourth for 4 years now. Has a certain ring to it, no? I’ll recap it on Tuesday, I hope; it was a fun race and even more fun to go with friends.

I had a morning vet appointment with Bandit. Decided to switch things up a bit and ran a little over 2 miles and then got him to run the last little bit with me. I expected it to be super slow and was pleasantly surprised that it wasn’t.

While it’s not impossible for me to run Thursday mornings, it’s hard for me to run and get a walk in before I have to leave for a meeting. And now that it’s warming up, that meant a pre-dinner run.

Mr. Judy warned me it might rain — I wish it had! Although the humidity wasn’t too bad, it was cloudy, and there was a nice breeze. Tried to get a pic of the big and little dogs on each side of the tire, but the minute I crossed the road to get closer they started to bark and run the fence line.

Humid again, but with plenty of cloud cover. It’s almost always a good day when I get to run with friends, especially one I hadn’t seen since the beginning of the year. And thankfully the rain waited for long after we were done (since some of it was heavy and there was some thunder, too).

Favorites of the week
It was time for Bandit’s annual this week (can you believe that?). He was examined, got his rabies vaccination, got blood drawn, and his claws clipped, and no one got hurt (for those that don’t know, he bit the first vet I took him to after we’d had him for about a week last year). He did growl at the vet when she came in . . . apparently he has white coat syndrome.

In July Skirtsports does its #31daysofskirtsports. It’s a fun little game, where there’s a word prompt for each day. And the chance of prizes (and you don’t have to be in Skirtsports, either).

I got started on it last summer and then we adopted Bandit and that was the end of that. I’ve been having fun playing along on Instagram (you follow me, right?) this year.

After our run on Saturday, five of us went out for breakfast. We all enjoyed and had lots of laughs.

I really dithered on what to do on Sunday. First I tempted a friend to hike with me, then changed my mind (she had a lot to do anyway and I was kind of tired). Then I was going to go up to a Farmer’s Market. Then when Mr. Judy actually agreed to come out on a hike — who could refuse? Especially as the rain Saturday had blown in a lovely day today.

We headed to the park that we had thought about visiting last weekend, another one we’d been to once with Lola and Chester and never returned to. While it’s a beautiful park, it’s not at all well marked and the employees were less than helpful. The trail we had thought about doing last week was closed (which we knew, thankfully), as a woman was injured by a falling rock; I guess we dodged a bullet by not going last week!

We were off to a frustrating start trying to hunt down the trail, but eventually we figured it out and it was a nice, easy trail with some lovely views: 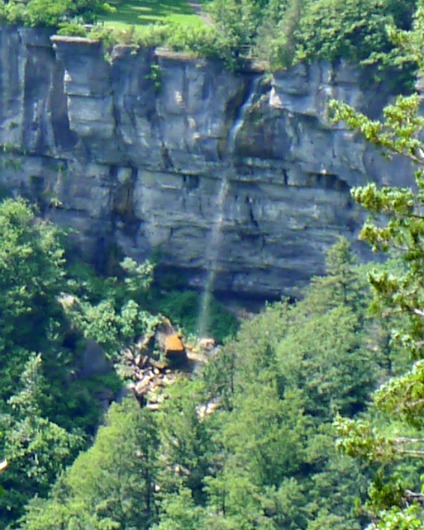 Favorite way to stay active during the summer?

What fruit and/or veggies are you loving lately?