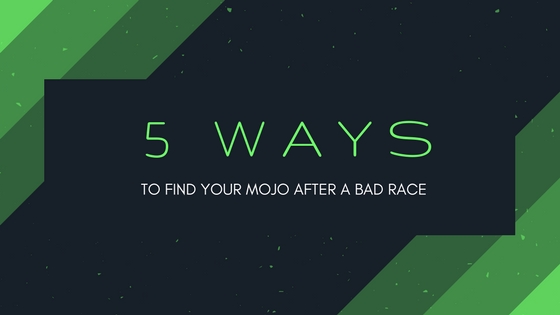 I’m talking about how to recover mentally, not physically (I covered that recently in this post here).

Today I am joining up with the  Friday Five 2.0  from Fairytales & Fitness and Rachel @ Running on Happy to share five ways to find your mojo again after a bad race.

One point I didn’t make: have a big goal. A goal so big that you have to keep on running. I’m serious about trying to run a half in every state, but because I want them to be experiences and I want to explore new places, I only do a few a year (usually). I still have 34 states to go. It could easily take me ten years or more — I’ll be close to 70 (or I just might be 70).

The point is it’s a big goal that really motivates me. It motivates me to try to train smart, eat smart, and recover smart. Despite a great year of running so far in 2017, I’ve also had some spectacularly bad races in the past, too.

Take a break from running completely
You may find that you are totally burned out on running; that’s perfectly normal and there’s nothing wrong with that. It’s also not a bad idea to give your body a break from running after a longer race. One rule of thumb is to take off one day for every mile you ran — which doesn’t necessarily mean you can’t run in that recovery time, but that you shouldn’t be running as hard or as much.

If you really feel like you never want to run again — don’t! It’s okay. In fact, have you ever noticed that when you can’t run, even if you don’t want to run, runners are suddenly everywhere and you’re totally envious of them?

You’ll know you’re ready to return to running when you look at those runners and think “I want to be running, too”.

Either return to a sport you love or try a new one
So you’ve sworn off running. That doesn’t mean you suddenly have to turn into a couch potato. How about golf? tennis? swimming? hiking? biking? boxing? The alternatives are literally endless these days.

You might just find something new that you love in your downtime. Becoming more than a one trick pony might help your running down the road.

Accentuate the positive
No race is ever all bad, or ever all good, for that matter. There are good things and bad things in every race. Rather than dwelling on what went wrong, think about what went right.

Analyze then let go
It can be easy to lose yourself in thinking about what went wrong for hours, weeks, days.

It’s fine — in fact it’s great — to think about what went wrong, and why. Maybe set new goals that are more achievable for you now; that doesn’t mean you won’t achieve the goals you had for this race some other day.

Look for a redemption race
Some people have zero desire to race after a really bad race. Some people, though, feel like proving themselves.

If you aren’t injured, and you truly believe that you can still meet your goals without injuring yourself, see if you can find another race soon. I personally wouldn’t recommend within the next week or two, but you know your own body best.

If you’ve just run a marathon, even if you came up far short of your goal, again, I wouldn’t recommend signing right up for another marathon. It takes a lot longer to recover from a marathon even if you feel back to normal. Too much, too soon could easily be a recipe for disaster.

Unless, of course, you’re an ultra runner and used to running #allthemiles.

So let me know in the comments:

Have you ever signed up for a redemption race?

How do you get back into running after a bad race?

What’s the least time between marathons for you?