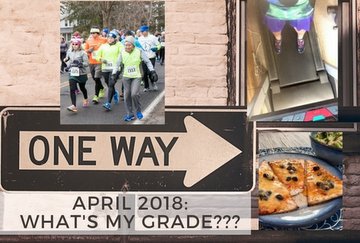 April wasn’t as busy as March, but the weather — well, you know. It had me feeling kind of meh for a lot of the month — but not actively sick. April also ushered in my first race of 2018 & there’s actually another race on the schedule for this weekend.

And yes, I know there’s one more week left in April. But next week I hope to have a race recap, I’d already scheduled this post, so I decided to roll with it. Hopefully not much will change in the next week — except for running my first 5k in quite some time. And if the forecast is right (when is it ever?) then it will actually be nice weather for it.

Getting in scheduled runs
The knees settled down, but I was very tired the week of my first race of 2018. Unlike earlier in the year, I noted that I wasn’t feeling well — so yes, I traded a rest day for an easy day. Still didn’t feel great the next week, but I got in all my runs and was no worse for it.

Recording my runs
I have continued to do a good job on recording my runs. Even of (mostly) putting in workout notes in a timely fashion for Coach Rachel @ Runningonhappy. As the miles begin to slowly pile on, I really hope I can keep this up!

Dynamic Warmup
I am lucky — I don’t work, so that leaves me with more time than a lot of runners. Not that I’m sitting around doing nothing, mind you. It gives me the time to make sure I get in that warmup — I know just how important it is to me. There were a few rushed warmups this month of course; what else is new? But hey, even in the pouring rain we warmed up in the shelter of a pavilion!

Foam Rolling
I have also continued to be sure to foam roll. In fact, I went back to a few old programs (and one new one) for prehab — working on knees and ankles. I do have some big plans for 2018, and I need to be proactive about keeping everything in working order.

Nutrition
For the most part nutrition was on point in April. I had one week where there was more mindless munching than normal — the scale certainly didn’t like that — but that’s part of life. The scale isn’t really moving much — it actually doesn’t need to move much — but I’m feeling a bit less fluffy.

Support
Epsom soaks? An epic fail. I attended an open house and got a few minutes of a chair massage, and then the next day got my free massage after the Delmar Dash (read about my first race of 2018 here). No need for a chiropractor appointment this month.

Cross Training
I’m back at Strength Training fairly regularly — some weeks twice, some weeks three times — most have been pretty short & sweet. A more regular yoga practice. A little Pilates sprinkled in here and there. A little time on the stationary bike here and there. Not bad — I tend to be rather type A trying to get it all in, but something is always better than nothing. I’d like to be doing a bit more — but wouldn’t most runners?

April 2018  gets  . . .
. . . a A-. Despite feeling so-so for about half the month, I snagged a PR in my first race of 2018 and I feel my running has been pretty strong this month. Maybe because the mileage is still fairly low. There is room for improvement — isn’t there always?

Which leads me to May Goals: