Another autograph added to my famous runners visor (which includes Frank Shorter, Deena Kastor, and Bart Yasso among others — I’ve been lucky to meet some very cool runners!). Some sleepless nights, some hot runs, and one last 5k for the summer (next race will be a 4 miler).

I’m joining up with the Weekly Wrap from Holly @ Hohoruns and Wendy @ Taking the Long Way Home to wrap up another week of training and racing. 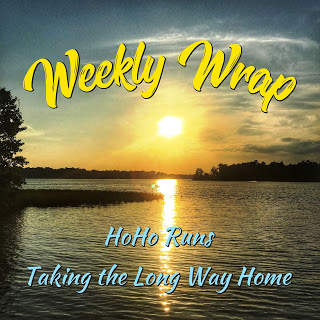 Monday
I so wanted to go to the unofficial FTC run, but we had to be on the road by 10 — I know it sounds like it would be easy to get in those miles before we left, but since I also had to feed the furkids (which is complicated), shower, change, make sure we had stuff for the dogs with us — time runs out quickly.

It was a strong easy run on the treadmill, if that makes sense.

Wednesday
I wanted to do this run on Tuesday, but going to my parents is always a tiring day and this was speedwork, so I knew I was better off putting it off a day. Both days were hot and humid, by the way.

While I didn’t hit my paces for much of the 8 x 400m on tap, I was pretty consistent and consistently close. It was also 74 and humid by the time I finished, there wasn’t as much shade as the previous week — yes, I’m really happy with this run!

Thursday
I had planned to move the easy run with strides to this day since I prefer some rest before a race — even when it’s a 5k, even when it’s not a goal race. After a mostly sleepless night Tuesday and a hard run on Wednesday, I figured rest would be more important.

Then I got out there to walk the dogs, and it was actually quite pleasant with some cloud cover and a breeze. And Friday is supposed to be rainy. So I quickly changed, made all the furkids wait on their breakfasts, skipped my warmup and just ran.

Saturday
When I opened the door to check the weather early in the morning, OMG it was so humid. Horrible. But by race time (9 am) the humidity had greatly dissipated and the cloud cover helped a lot, too.

I know a lot of people were complaining about the heat, but while it definitely wasn’t cool, it didn’t really bother me that much. It must have been my Skirt Sports Cool It skirt — all my hot runs lately (and there have been a few) in it have gone really well.

That was the race the group I was mentoring was training for, and while I will miss mentoring, I’ll enjoy having more flexibility with my running now — especially as it’s time to ramp it up for my next half next month.

I’ll recap the race on Tuesday. 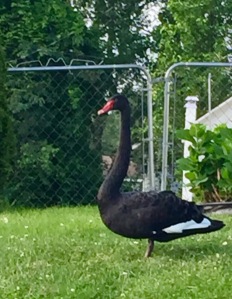 Favorites of the week
You just never know what you’ll run into in this neighborhood. Well, any neighborhood I’ve ever lived in really. But we don’t live out in the country. Yet I was astounded to see that black goose wandering around our neighborhood while walking the dogs and on my run on Thursday.

When I googled Black Geese (read more about them here) — and there are several species of them that live in North America — none of them looked like the fellow I saw. Maybe he’s the opposite of an albino? Or maybe he’s young and will get more white later? Anyone have any answers for me? Actually, Paula @ Neveradullbling had an answer — a domesticated black swan, most likely a pet. Except he/she? was just wandering free in the neighborhood; it never occurred to me that it wasn’t a wild animal!

I met Joan Benoit Samuelson briefly at the panel of former winners for the Freihofers Run for Women,.

My raised bed have gone to weed the last few years. Quite literally. Between Chester, Bandit, and my parents, I just did not have the time for them. Mr. Judy helped me whip them into shape and I planted my small garden.

Mr. Judy also turned a small pallet that had been slowly decaying behind our shed into a small planter for me. The planters weren’t really deep enough for the plants, but they’re mostly herbs and herbs are pretty hardy so we’ll see how they do.

Blog posts that caught my eye this week:

Ever run an all women’s race?