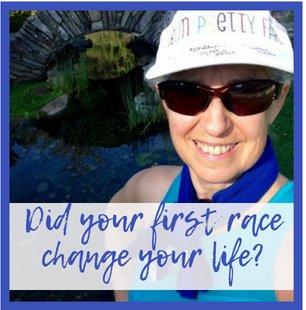 Or so I Thought

I began to run when we moved from TX to NY. Mostly to try to bust through a weight loss plateau (read more about my running journey here).

My Weight Watchers leader kept talking up the Freihofers 5k. She wanted to get a group from her meeting to run it. She promised we could all do it, and that she would come back and run us in. She also promised it would change our lives if we’d never run a 5k.

A little backstory: my WW  leader has always been a jock and active — even when she was more than 100 pounds overweight. Me — yeah, no. I will never consider myself an athlete, but over the years I have most definitely turned into an at least somewhat active person.

I say somewhat, because despite the fact I train for and run half marathons, strength train, do yoga, swim when it’s warmer, and hike — I still spend a lot of the day sitting — and I can’t blame that on a job!

I’ll try anything
I’d been on a swimteam and a bowling team and I competed with my flute when I was younger, so competition was not new to me. In fact, I’d go as far to say that competition was something that was missing from my life.

I like to try things, too. Food. Makeup. Clothes. Shoes. Different forms of activity.  So despite the fact that I never planned to run a race — because like every newbie runner, I was scared of being last — I signed up. Other than the people in my WW meeting running the race, I knew no runners at the time. Because I did all my running on my own.

Seriously, there was no runner’s high. Sure, it made me happy to finish the race. To know I could do it, although I never doubted that I could. But that was it, I thought: I was one and done. No more racing for me. I really didn’t get why my leader had talked up the race so much.

I was happy I did it. But I didn’t feel like my life had changed.

Except . . . it did change my life
I kept running. And I kept running races. I didn’t love running, oh no. Yet here I am, nine years later. And running is as much a part of me now as my curly hair.

And running absolutely changed my life:

Were you hooked on running from the very first step?

Were you hooked on running from the very first race?

How has running changed your life?

31 thoughts on “My First 5k Didn’t Change My Life”