I won’t lie: I spent much of the summer kicking myself for not running this race last summer. Last summer was so much cooler. And race day last summer? I happen to remember it because it was the trail running festival where I did the 5k and then volunteered — it was a gorgeous, cool day!

What was I thinking? Let’s face it, this summer has not been fun weather-wise. Rain, humidity, heat, repeat, repeat, repeat. Then I remembered — by June last year I’d already run three hard halfs and was signed up for another one in October. I wasn’t mentally ready to tackle 18 miles!

Hold on to your hats, ladies & gents, it’s gonna be a long one. Because I am not planning on anything longer than a half again anytime soon but you always remember your first.

I believe that things happen for a reason, though. The course was changed this year: it started and ended in Sacket’s Harbor, instead of starting in Watertown. Supposedly it was a lot flatter, although I wouldn’t exactly call it flat and fast like it was billed (isn’t that always the case?).

I’m getting ahead of myself, though.

Packet Pickup
I picked up my packet Saturday since it was such an easy walk from where we were staying. The goody bag didn’t have much, but it was printed with the race logo, and they gave you a can of tart cherry juice and a can of beet juice, which I thought was a really nice touch.

We got the wristband for the beer, which Mr. Judy gave to someone. There was a coupon for a free soft ice cream after the race at a local place; we never did get around to it.

There is a very small expo, so if you’ve forgotten something essential you may be able to find it — and I picked up my usual expo buy, a couple of pairs of sunglasses.

Getting There & Hanging Out
As I mentioned above, the start was changed to Sacket’s Harbor this year. We stayed at the Harbor House Inn (which I definitely recommend!) and it was a simple ten minute walk to the starting line. Of course using my own bathroom before the race was really nice! We also ran right past the hotel towards the end of the race, and I joked with one of the course marshals that I was just going to take a little break in my hotel room.

Unfortunately it started to rain the minute we stepped outside our hotel. Mr. Judy had a rain poncho which I eventually put on. There were a couple of tents and a picnic table pavilion, and most of us were huddling under cover in those.

The weather & dressing
Ok, the weather. It doesn’t sound good, does it? High 60s at the start. Humid, although not oppressively so. Wind gusts up to 12 mph. It rained the first two miles, but it wasn’t a downpour, and then it stopped (except for a brief pelting with some cold rain about mile 12).

Trust me when I say that this was actually pretty good weather — it was cloudy almost the entire race, which was a huge help — if it had been a sunny day, there would have been very little shade; and those wind gusts, while not super helpful, were cooling.

I spent a lot of time trying to figure out what the heck to wear. I went with the Wonder Girl Tank in Temper Tantrum and Cool It Skirt; Newton Distance on the feet, like I did in the Camp Chingacook 10k (read about it here).

I’d first worn a Wonder Girl Tank in the Best Damn Race NOLA (read about it here), and that was actually similar temps, although much more humid. I brought that top with me, figuring if it got me through 13.1 swampy miles without chafing, it was good luck. Wonder Girl is more fitted in 2018, so my top in Temper Tantrum is a medium and I hadn’t worn it on a long run. In the end I went with the larger one to be more comfortable and prayed I wouldn’t have chafing, and I didn’t.

So let’s talk about chafing, shall we? I practically bathed in lube: my underarms, under my bra, shoulders, under my pockets, between my toes, bottoms of my feet, and my ankles. I actually thought, despite running in wet socks for 18 miles and the humid conditions, that I’d gotten off scott free. Until I showered, of course.

None of the usual suspects were the problem — it was my race belt that attacked me! I had some chafing on my back (not unusual) and on my stomach on each side of my belly button. I hadn’t felt it, but it seriously looked like I’d had an operation there.

My Race Plan
This time I actually had a race plan! A very simple race plan. I’d told Rachel @ Runningonhappy that I wasn’t out to crush this race, simply to finish, hopefully uninjured. I still didn’t execute the plan exactly as she wrote it, but the end result was still spot on.

There was actually more runners running the 1812 Challenge than there were the half.

Was the race well run?
Yes, even with the new course this year, I found this race to be a well oiled machine. Oddly enough, I didn’t have any dessert after the race. Maybe because I polished off the other half of my stuffed French Toast.

There was a woman singing at the packet pickup, and I felt kind of bad for her because no one was really paying attention to her. The Sacket’s Harbor Battlefield is bordered on three sides by Lake Ontario and is lovely.

Even though the course was changed this year, this race was such a pleasant outing after the fiasco that was my last half (read about that here, but I still need to update it about the fact that I will never get an official medal from it). The race started at 7:30 on the dot. Since I wore my hydration vest, as usual I didn’t need to stop at aid stations — as far as I could see they were always well stocked, even for a BOTPer like me.

There is entertainment at a few places along the route: a fiddler, bagpipers, and a girl doing Irish Dancing.

Patrick Henry Photography was on hand to take photos mostly near the beginning and the end (at least for the people going all the way). 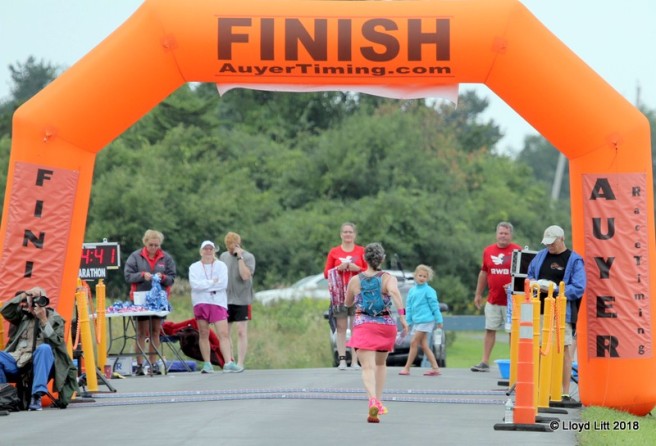 There was a photographer right before the finish line, but for some reason there are no  finish line photos of me except for the one Mr. Judy took above. Since there was absolutely no one running anywhere near me at the end, that’s a little surprising.

When I crossed the finish line I thought the clock said 3:34 — and that’s what it looks like from the photo above — but my Garmin agrees with 3:39. I have to admit to a little disappointment in losing 5 minutes off of what I thought was my finish time.

I was much closer to the BOTP than the middle, but food and drink were still plentiful after the race: pizza, donuts, chocolate milk, beer, bananas, apples. It wasn’t a huge spread but there was definitely some variety — I had half a donut. As is usual, I wasn’t hungry immediately after the race. The volunteers were super enthusiastic and wanted to make sure that they got you what you wanted.

What I learned
I knew before I left home that as long as the weather wasn’t too hot and I didn’t get injured, I would finish this race, and I was pretty sure I could do it within the time limit, too (4 hours).

I confirmed what I already knew: racing, any distance, is hard. It’s supposed to be hard. I sort of used this race as a training run — not that I’m training for anything further — but I didn’t push as hard as I know I’m capable of. My pace ended up being only about 15 seconds faster per mile than my long run pace.

And I know I was kind of genius in my decision to run a half marathon a month before this race. It helped immensely mentally. I trained for a half, and then I just had two really, really long runs. Running the half hid the fact that I was going to run an 18 mile race. It worked perfectly.

And running with someone for several miles during the race? Priceless — thank you Dina!