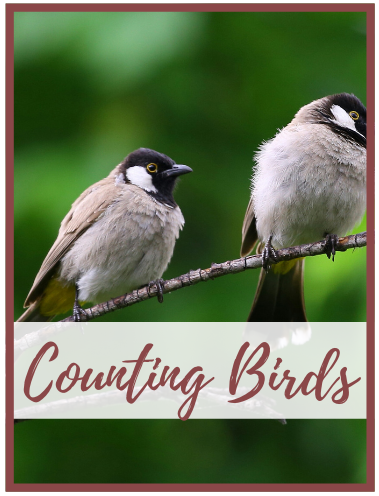 Maybe you’re training for a real life race — or maybe you’ve run a few already. If you need to change up things a bit, I’ve got a fun challenge for you this week! Bonus points if you can snag photos.

I’ve been running around my neighborhood a lot lately, and this has helped me from being super bored with the scenery — even if the scenery in Spring is pretty!

What animals do you see on the run? Count em!
Last year we were trying to find the colors of the rainbow (see this post here). Thanks to Kim @ kimrunsonthefly for this challenge. She happened to mention that she wasn’t seeing many Robins any more.

My guess is I’m seeing all the Robins because I’m out there much, much later than Kim. Apparently the Robins don’t get many worms because they are not early morning birds (just joking)!

After Kim made that comment, on the next walk with Mr. Judy and Bandit I started to count Robins. I didn’t even think of starting to do it until we’d already been walking a while. We don’t walk very far, either.

That first day I counted 11 Robins and 1 Rabbit.

The next day I ran and I counted 11 Robins, 1 Cardinal, 1 Rabbit and a Murder of Crows

Again I didn’t even think to start looking for them until I was halfway through my run.

The next week I started right away — and counted a record number of Robins: 47!

Next time you’re bored on your run, I’d love to hear how many and which kind of animals you see on the run — I know some of you see some really cool animals! Like I said at the beginning of the post, bonus points for photos. Although I rarely got good bird photos, they always fly away.

What I noticed
Although you often see Robins in pairs, I saw a lot of bachelors too. There were Robin deserts in the neighborhood — I’d see a bunch and then none for quite a while. So far I’m not seeing as many rabbits as in years past, but that may be because I’m not running early yet — and also because I know Rabbits are cyclical (they wind down then they’re everywhere again).

Final Thoughts
I can remember quite a few hot Summer runs in years past when I would count the Rabbits. It was a sign the run wasn’t going well. Better than counting steps though!

What animals do you commonly see on the run?

Are you able to get good bird photos?

Can you identify different types of birds?

31 thoughts on “Challenge: Count All the Animals!”