Let’s just say it wasn’t an auspicious start to my training for my next half: I finally felt like I got back into the groove. The taping was helping my hamstrings tremendously, my paces were normal, I had a great run Friday and Saturday last week, and another great run on Monday.

Then Monday evening I felt like I’d been run over by a truck. Thankfully it ended up being just a very run-down feeling, not a real illness (knock on wood!), especially as Mr. Judy was out on the West Coast visiting family Tuesday – Friday — which in some ways actually helped, since I only had to cook to please myself and could watch the movies he doesn’t enjoy.

I took it easy — you’ll notice I ran Monday and then not again until Saturday. It’s early days in training, so better to nip this in the bud with some rest and chicken soup.

I’m joining up with the Weekly Wrap from Holly @ Hohoruns and Wendy @ Taking the Long Way Home to share how I’m listening to my body while starting to train for my next half. 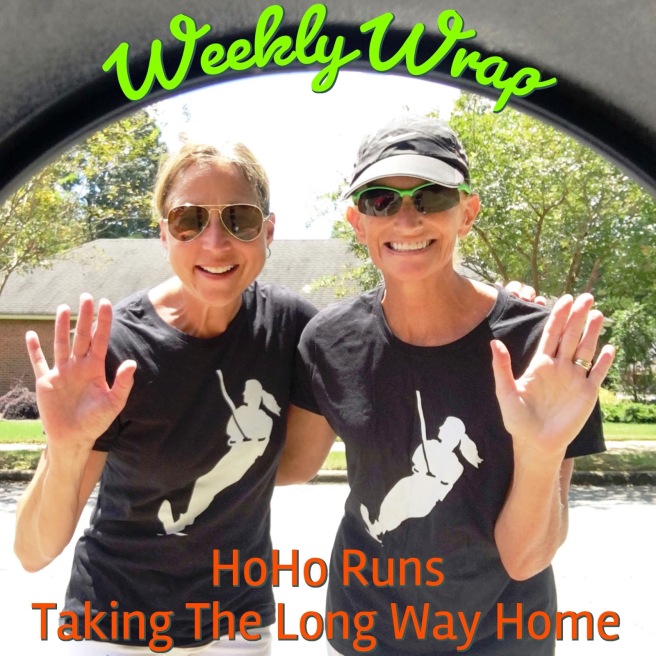 Monday
I do wish the weather people could get things right, but I’m so glad I #optedoutside despite potential rain. I was rewarded with a sunny run and no rain and another run that was pretty normal paces without trying to make it so.

It’s kind of sad how grateful I am for even an hour of sun because it’s been so lacking here lately!

Saturday
Some of the best weather we’ve had for Last Run — no snow & ice, thankfully, unlike last year. Winds calm. Chilly, but not terrible. Thanks to Darlene @ MyFirst5k for picking up almost all our bibs! And thanks to Running Buddy S for driving! Because a not favorite of the week was my car battery dying on Thursday.

A good “time” was had by all and I’ll recap it in Tuesday’s post.

Sunday
Several friends were doing the first Winter Series (supported long runs from a local running club). The distances were 3, 5, and 15k — and none of them really jived with what I wanted to do. Not to mention it’s a really boring place to run, so I decided to go out later, because while the paths remain free of snow, there are still better options.

I carbed up at breakfast, a bit too much for 7 miles, and by the time I got out there the sun was on its way down again and it got chillier and chillier but I had a nice strong run.

Favorites of the week
A potluck was planned after our 5k yesterday, with some knitting lessons thrown in. We had at least 4 experienced knitters and then all different levels from a little knitting knowledge to none. While I’ve been knitting on and off for longer than I’ve been married — which is a long time! — it has been off the last few years so I figured I better pick up some needles to figure it out again.

I’ve never tried to teach anyone to knit before, and usually I’m a good teacher, but not so much this time. I tried, and then I just knit.

I was feeling super run down after my run on Monday, so eventually I decided to make a big batch of chicken noodle soup. It seemed to do the trick, I felt better after I had some! And yes, I made it in the Instant Pot.

I left some towels warming up on my towel warmer before I went to run, with the clothes I planned to change into on top. They were so nice and warm when I put them on!

Do you knit or crochet?