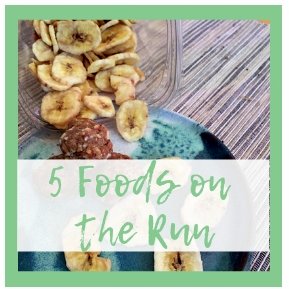 I think many runners rely on the same tried and true fuel, until for some reason it’s no longer working for them. I love trying new things, and I am almost constantly trying out new foods on the run when I’m running long.

Honeystinger Chews
Honeystinger is tried and true for me. I started out with Honeystinger, took a break while I explored other options, but Honeystinger chews (buy them here) and waffles (I prefer the gluten free waffles here) are almost always along for the ride when I’m running long. Which is exactly why I became a Honeystinger Ambassador.

Date Balls
There are a million recipes for date nut balls out there. Dates are a great source of natural sugar and carbs, but I find that I don’t really like to just chow down on dates on the run. Add in some nuts and other fixins’, though — yup, I almost always have some form of home made date balls with me on long runs too.

A few recipes to get you started:

Shortbread
A running friend recommended Lorna Doones to me one day. Which is not something I’d ever considered. I was having a hard time, though, because I was training in winter for a Southern half. Unfortunately you could break a tooth on my Honeystinger chews — I needed another source of fuel.

I never got Lorna Doones, but I did try out a different brand of shortbread cookies training for and running my last half (read about it here).

They weren’t my sole source of fuel — since it was a warm day I was using my Honeystinger chews as I normally do, but the truth is you never know what will appeal to you at the end of a long run (or during!), so I like to bring a variety of things to eat with me, and I do love shortbread.

The race went relatively well, so I guess it worked for me.

Chocolate covered ginger
Are you like me and struggle to continue to take in fuel as you run long? It’s about the only time I’m not hungry. My stomach is pretty strong, knock on wood, but I do find it hard to get in the fuel I know I need towards the end.

Ginger is very good for upset stomachs. Crystallized ginger is also sweetened, which makes it a good energy source — but to me it’s not annoyingly sweet. Of course I go for dark chocolate covered ginger, but you don’t have to. I usually like to take in a few pieces a few times during a longer race.

Banana Chips
Banana Chips were one of my latest discoveries. I used them in one of the date ball recipes I used for training, and just plain before and during the run/race.

What’s missing?
Gels. I do not take in any gels at all. Ever. It’s not even that I don’t like gels — I do, actually. It’s because as I’ve written about a lot, I prefer to take in a little bit every mile rather than a lot every 45 minutes or so.

It’s not about stomach woes for me; I used gels for quite some time when I first started to run. If you are a person who finds their stomach rebelling, though, it may be because you take in a large amount of sugar and carbs all at once, and getting in a little bit more often might work for you.

Another option is to get gel flasks and dilute your gel with water — that way you actually can take in just a little bit of gel more frequently. I tried that for a while. My problem with that was I really couldn’t tell how much I was taking in and whether or not it was enough. Gel flasks can get a little messy too.

The other thing that’s missing: Nuun. I love Nuun, too, which is why I became an ambassador for them as well. In fact, it’s a similar story: I started out using Nuun, dropped it, then started again a few years back.