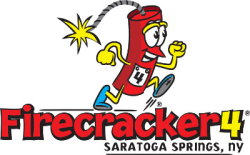 Firecracker 4 is a part shady, part really sunny, somewhat hilly four miles on the fourth of July. It’s almost always really hot, with a late start of 9 am, and this year was no exception.

Getting There & Hanging Out
Our group was much smaller this year. I think I a few of us are so over this hot race, but some of us diehards decided to brave it (or were talked into it by their friends). I talked my Running Buddy D, who I don’t see as much these days, into an early start (she was driving). We were rewarded with a good parking space, making it easy to go back & forth several times.

Thankfully the city center, where packet pickup is, is air conditioned. And real bathrooms. We got our bibs & tshirts (although somehow I didn’t get a goodie bag; there was nothing exciting in it anyway so no big deal).

Running Buddy D was very disappointed that they wouldn’t allow you to exchange tshirts until 8:40, as hers was just too tight. She managed to sweet talk a volunteer into doing it for her earlier. She wanted to wear it in the race, but I reminded her nothing new on race day.

We met up with the other two from our group, hung out a bit, then we headed back to the car to pick up our water and my cooling towel, all of which I had on ice (literally). We met back up with our friends in the corrals. We had used the real bathroom a couple of times already.

The weather & dressing
Skirt Sports for the win. I went with the Racecation Tank  and Cool It Skirt; Newton Distance on the feet.

My Race Plan
I had actually ended up reading the race recap from last year (which I usually try to avoid), so I formed a plan — I wanted to hang at about a 10:45 pace, but I knew the heat was gonna be a big factor. Overall I wanted to get an average pace under 11 mm.

I just squeaked through with a 7 second course PR and met my goal of a average pace below 11 mm (again, just!). I know that I could have done much better if I hadn’t walked so much the last mile, but I met my goals and I didn’t faint, so I’m good with that.

Was the race well run?
This race is so much fun — if you’re ever in Saratoga, NY on the fourth you should check it out. There’s a ton of spectator support and the locals are out in force with hoses — much appreciated — even on a hot fourth like this one!

The AG awards are cool (not that I’m ever going to see one), the space with AC to hang out in and real bathrooms is a blessing. There’s water available both before and after the race, and some fruit and granola bars afterward. A couple of local food vendors had samples afterwards, too. New this year was food available for purchase post race, as well as a free beer, but Running Buddy D & I skipped that.

The late start is a pain, as is parking. Unless you know Saratoga well, the parking situation can be nerve wracking.