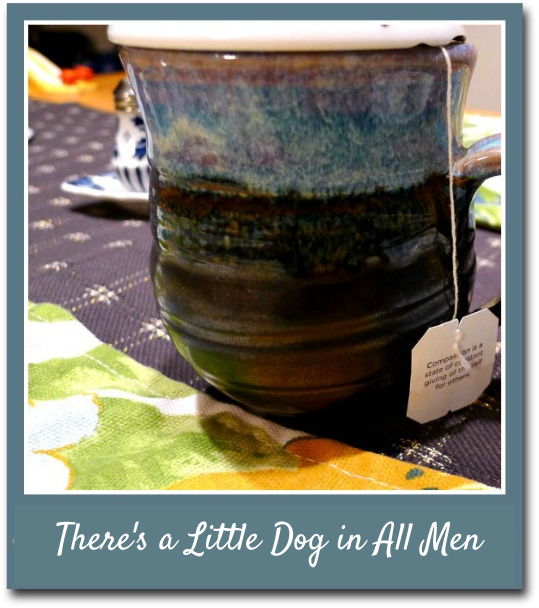 Mr. Judy and the dogs figure largely in what I’d tell you if we were meeting up for some hot beverages today. I’ll bet you’re really shocked — not! 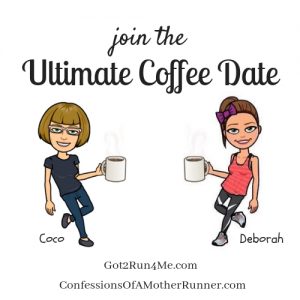 Pull up a chair and mug with Coco and Deborah and me for the ultimate tea date, while I forgive the dogs for the disgusting things they do because they’re cute. And maybe Mr. Judy, too.

If we were enjoying tea/coffee . . .
I would tell you Mr. Judy was going through some old stuff, and came across some papers from his Dad (who also suffered with dementia).One was a list of passwords. One was JLITT.

We had a good laugh when at first I was puzzled about why he would use my name as a password. His first name was Jerry. I needed that laugh!

If we were enjoying tea/coffee . . .
I’d tell you that Mr. Judy got a bee in his bonnet about making latkes (potato pancakes) from scratch. Yes, Mr. Judy can cook, but doesn’t do it a lot, so it’s often filled with me finding almost everything for him and some swearing. If you’ve never made latkes, it’s a labor intensive procedure and this fell in the week we were moving my Dad to the nursing home.

I made the frozen latkes from Trader Joes — as did one of his aunts and his sister — but that wasn’t good enough for him. I runfess I’m glad he did it while I was away from home.

If we were enjoying tea/coffee . . .
I’d tell you I came home from yoga last Sunday, put away the groceries, sat down and talked to Mr. Judy a bit. Got up to make myself some tea. Walked back over and . . . someone had thrown up.

My money is on Bandit. Lola had just gotten up on the couch, and I think we would have noticed if she’d gotten back off.  I don’t remember Bandit getting off his couch, but he is the one that randomly throws up.

I’m pretty sure it wasn’t there when I was talking to Mr. Judy, we didn’t hear anything (Bandit tends to do it pretty quietly). It wasn’t me and it wasn’t Mr. Judy. Good thing the dogs are cute, and at least this time they missed bedding, furniture, and carpeting.

If we were enjoying tea/coffee . . .
I’d tell you I have actually gone from someone who loved to bake, and often baked simply because I enjoyed it and found it stress-busting . . . to someone that doesn’t bake so often anymore.

Could that be part of the secret to being able to maintain my weight without tracking? It’s mostly been that I am just too busy with other things. You know how when you’re really engaged in something and you don’t even think about eating? Yeah, it’s kind of like that.

If we were enjoying tea/coffee . . .
I’d tell you that starting my YouTube Channel (you can check it out here) has been hard! I seriously knew nothing about editing video before I started. It seemed like with each new video a different problem would pop up.

In my latest video, I’d recorded an intro to it — at the moment I film using my Ipad — and for the first time, for whatever reason, the audio came out completely garbled. Unusable. Hence no intro to that video.

In that same video, I recorded the audio early one morning. It’s a longer video, clocking in at almost an hour. I finished, hit done, and poof! No audio. I simply didn’t have another hour to sit & re-record it. As I was venting to Mr. Judy, it finally appeared. I guess it just needed some processing time.

What was the last good laugh you had?

What was the last thing you had to learn that really challenged you?

What was something you used to really enjoy doing that you no longer do?

I am also linking up with the  Fridays with Fairytales and Fitness from Fairytales & Fitness.