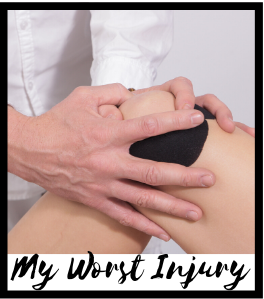 I have been somewhat lucky when it comes to injuries. Oh sure, things have niggled. They’ve been achy. They’ve even been somewhat painful. For the most part I’ve been able to keep on running through those aches and niggles. Except one.

The Perfect Race?
I remember the weather on the day I ran my half marathon in Rhode Island. It was just perfect: beautiful blue skies, not too cold or too hot. I lined up with the rest of the runners full of hope — despite the fact that a mysterious pain had sidelined me from running a couple of weeks before the race.

I did finish. We went on to Cape Cod, where we’d rented an AirBnB (and we had the dogs with us). We were near the famous Sundae School Ice Cream shop, but I was in too much pain to join Mr. Judy when he went for his ice cream sundae. I curled up on the couch with Chester as my heating pad.

What went wrong?
I know now that it was an IT Band injury. Here we are 7 years later, and I feel like I am just now getting back to the paces I was running back then. Which are not particularly fast. I thought I had trained smart, but clearly I did not.

The minute it was too painful to run I should have sought help: from a chiropractor, from a physical therapist, from a running coach. Even though I trained with a group with coaches in the summer, it was not our training season and it didn’t occur to me that this was an injury.

I should not have run that half. I know many people say they are happy that they completed a half, no matter the pain, but it left me in pain while running longer distances for months. I came very close to giving up on running longer distances all together. I do not think running through an injury when it leaves you unable to run without pain is the right choice — but hindsight is 20/20.

How did I fix it?
I started out by wearing a knee brace, once I’d figured out what was wrong. Notice that I still didn’t seek out professional help — which of course would have helped. I was lucky; I only took a couple of weeks off running. Running was painful after just 3 miles when I did start running again Although I was running with my group again that Summer, I didn’t sign up for a half initially because long runs were still painful.

Finally I ran 7 miles without pain. I signed up for Smuttynose Rockfest, which billed itself as one of the flattest halfs in New England. Which is true. Which is also not to say that it’s flat.

Still, on a rainy, raw, cold day I had my redemption half and a shiny new PR to boot. I discovered KT Tape (and eventually Rocktape) before the next half, which wasn’t a PR, not even close — but it was pain free. I have taped for every half since then, 6 years ago. There have been other niggles and aches, but so far, knock on wood, my IT Band stays pretty quiet.

Of course I have also worked on strengthening my glutes and hips. I’m a dedicated foam roller. There’s never just one thing that gets you through an injury. I learned my painful lesson from that disaster of a half, and I have sought out Chiropractic help and on occasion Physical Therapy for other niggles and aches before they derailed my training. It truly does take a village to race for most runners.

Run through the pain or live to run another day? It’s a highly personal choice. Don’t listen to the people on the Internet telling you you can do it — they don’t know you, and they don’t know your body. Only you know what the right decision for you is. — Chocolaterunsjudy

Final thoughts
Running through an injury is a personal decision. For some people it’s worth the pain. I’d rather live to run another day, rather than risk serious injury. I want to keep running the rest of my life. I still have many states to run in.

What was your worst injury?

What did you do to help heal it?

What was the longest time you had to take off running due to injury?

36 thoughts on “My Worst Injury”