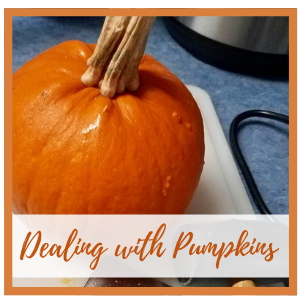 Reasons to for runners to eat pumpkin:

Bonus benefit: don’t throw out the seeds (I didn’t!). They are high in phytosterols, which might help lower cholesterol and are also high in magnesium — which just might help you if you’re prone to cramping.

I don’t usually cook, them, I’ll admit. It’s easier to simply open up a can of pumpkin puree — although did you know that canned “pumpkin” is often a different kind of squash? I digress.

People really into baking would tell you that fresh pumpkin puree tastes much better than canned. I’m not really sure I notice that much difference. We get a veggie box during the Summer, and pie pumpkins were one of our options at the end of the season. I’d read that you could cook pie pumpkins in the Instant Pot — I thought that would help a lot!

While the steamed pumpkin is cooling, you can run water over the pumpkin seeds to get any stringy stuff off of them.

I put a paper towel on a baking cooling rack and just spread the pumpkin seeds out on it to air dry. I haven’t done anything with them . . . yet. Unfortunately they went moldy! I knew I needed a real mason jar, but we didn’t have many available after the great pumpkin massacre.

I had two large pie pumpkins and I estimate I got the equivalent of 3-4 cans of pumpkin out of them. Plus a cup of pumpkin seeds. I actually do enjoy pumpkin seeds and use them to top salads or soups, but I’m thinking I might try to make some pumpkin seed milk (which is similar to making almond or cashew milk (see this blog post here) — yes, I still make my own nut milk every week!

What did I do with the pumpkin?

I put the warm pumpkin puree into mason jars — basically, it’s a way to “can” stuff without actually canning. I also do this all Winter with warm soups. Who needs to can anything?

I’ve only made two things so far:

Pumpkin Cocoanut Curry Soup
Basically pumpkin and coconut mile and warming fall spices, topped with pumpkin seeds –not the seeds from my pumpkins!

When I lived in VT (this is going back almost 30 years) I used to buy pie pumpkins and bake bread pudding right in there. I think I roasted them in the over first, then sliced off the top. Then you just mixed up the bread pudding and poured it into the pumpkin (of course removing the stringy stuff and seeds first) and cooked it until the bread pudding was set. So you’d get some cooked pumpkin with every bite of bread pudding! I used to eat that for breakfast.

Final Thoughts
It was a lot of work, not gonna lie. Luckily pumpkins keep quite well in the fridge for quite some time; I think we had them in there at least three weeks. I put it off until a time I knew I had the energy and the time to deal with it.

Will I get pie pumpkins next year if they’re offered? Not sure! I don’t think it actually saved us money, although maybe a little bit. My guess is I will though — home made is almost always better.

Have you ever tried to cook a pie pumpkin?
What is your favorite Winter squash?

16 thoughts on “Getting the most out of pumpkin!”