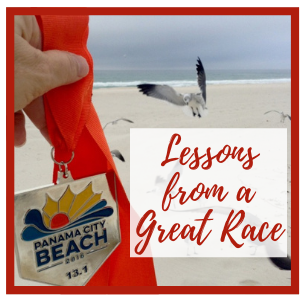 Five years ago I ran a half marathon with some fellow bloggers in Florida. At the time it was a long awaited PR — it didn’t even feel hard. It also kicked off a year of PRs in halfs.

It was also the start of a lot of turmoil in my life — the ongoing saga of my parents’ decline. At the time they were still living in my childhood home, but it became very clear right around that time that they couldn’t stay there after my mom had some surgery.

It was also not long after we had adopted Bandit, and we were embroiled in the mess that turned out to be. When we adopted him, we had Lola and Gizo, and they all had to be kept separate for months. We couldn’t walk Lola & Bandit together. He was a senior rescue and he had issues — he’s come a long way! — but at the time it was just another stress piled on top of the ongoing stress with my parents, not to mention the many years I’d just spent taking care of sick furkids.

Yet the race, which was in general was an afterthought for me, went well, and I learned a few things.

Your body needs to be prepared both physically and mentally. I learned that I could definitely do well on lower weekly mileage — as long as I’d been consistently running. Running consistently, training or no, is like money in the bank. It’s the golden ticket to staying strong and (hopefully) uninjured (although many factors go into injury).

I relearned how important Nuun was to keep me running smoothly
If you care to read the recap here (warning: it’s long!) you’ll learn that I had really bad cramping starting at mile 10 and getting steadily worse until the end of the race.

When I started running, I used Nuun. At some point I got away from that — mainly because I don’t like to drink anything sweet on long runs. After this race I went back to Nuun. I won’t say I never cramp, but it’s pretty rare these days. #teamnuun for life!

Those saltstick chews I lost during the race? Yes, those have also become a staple because I’m a salty runner!

I learned that it’s not so bad to be one of the slowest runners in a group
Because then you have a built in cheering squad, since the speedy runners have already finished and can cheer you in and take photos of you crossing that finish line.

Final Thoughts
I had been running halfs for about five years at this point. I trained consistently. I did all the things you’re supposed to do. I remained stuck at pretty much the same finish time. Deep down I knew I had a faster finish time in me. I just knew it.

I was right, too. In fact, I have had a lot more PRs since that breakthrough race. Not all the halfs have been PRs, of course, but somehow that one race cascaded into a lot of improvement.

Only it wasn’t really that one race, right? It was all the work I’d put in before that race, and continued to put in after it.

Have you ever had a breakthrough race?
What did you learn from it?

27 thoughts on “3 Things Learned from a Great Race”