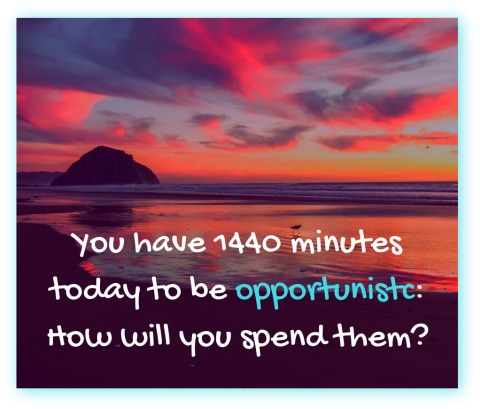 Opportunist: a person who exploits circumstances to gain immediate advantage rather than being guided by consistent principles or plans

I have to admit, in general I don’t consider myself to be an opportunist, except, perhaps, when it comes to training plans. I like to experiment, which means while certain elements of my half marathon training remain the same, I’d be bored if I did the same plan every single time.

I’m always looking for that holy grail — the plan that will help me capture that elusive running unicorn — you know, the 20 minute PR? I keep doing the work, but I often feel as though I am spinning my wheels and not advancing (I’m picturing the ferrari in Ferris Bueller’s Day Off here).

I don’t need to get “fast”, whatever that might mean. While an Age Group award would be nice, I’m not gonna lie, I can live without that, too. But I’d like to move up from the Back of the Pack to the middle.

I can control my destiny, but not my fate. Destiny means there are opportunities to turn right or left, but fate is a one-way street. I believe we all have the as to whether we fulfill our destiny, but our fate is sealed.
–Paul Coelho

About the only thing I can be opportunistic about with this half is trying to draft off another runner if it’s windy. Otherwise, it all comes down to my training (which went well, despite the circumstances) and

I did complete my half marathon. The hills were far worse than I anticipated (1000+ ft elevation gain, anyone?). While there was a slight breeze, no need to draft (not to mention finishing BOTP style means no one near enough to draft off of towards the end!).

One thing I know for sure
I’m not much of an opportunist. I like to plan, and I like to be guided by a plan. Signing up for the Best Damn Race in NOLA was rather opportunisitc, though: I was taking advantage of the lower price dangled as a carrot, but it was done rather on a whim, than with a plan.

Are you a planner, or more of an opportunist?

Ever found yourself being an opportunist during a race?

Do you think being an opportunist can be a good thing?

21 thoughts on “Opportunist: how will you use your minutes?”