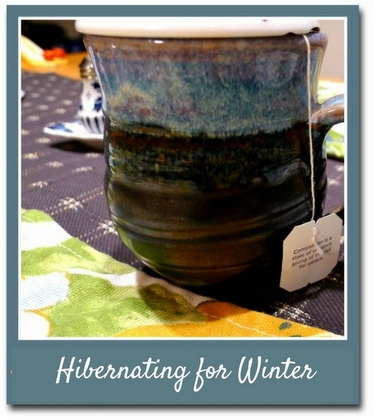 Hibernating would be great if I were living off my fat like a bear does. Except the only thing that really is hibernating is my activity — unlike a bear, I’m still eating. I try to be more mindful and make better choices knowing that I’m not moving as much, but, as they say, #thestruggleisreal.

If we were enjoying high tea . . .
I’d tell you that knowing that my first half (as of this writing) isn’t until the end of July kind of makes me want to find a spring half. I mean, that’s half a year away!

On the other hand, I’m kind of enjoying the fact that there’s no pressure to get in my runs. I’ll do them on the treadmill, since I don’t have to worry about racing in this godawful weather. And I’m sure my body is appreciating some downtime after 18 months of hard training.

If we were enjoying high tea . . .
I’d tell you that my body might be enjoying that downtime a little too much. As in there really hasn’t been a whole lot of activity lately. Not even dogwalks, as you may have noticed. With temps well below freezing and ice and snow still clinging to the roads, I don’t think we’d be walking very long.

Bandit thinks he wants to walk. He sees me suiting up to go get the mail or take out the trash, and he gets all excited. Wouldn’t you love to be a dog, and just be able to live in the moment?

If we were enjoying high tea . . .
I’d tell you that at some point I am sure I will not be able to take any more treadmill running. And I will have to brave the cold. Because it seriously doesn’t look to be warming up any time in this century (just slightly tongue in cheek there).

If we were enjoying high tea . . .
I’d tell you that Bandit is almost a regular dog now. Almost. While we still struggle with some inappetance (usually only in the morning), he is all about the treats now. And man, when I make turkey, he most definitely wants that, too. Not to mention he is now cleaning the kitchen floor on a regular basis (which has its pluses and its minuses).

On the other hand, when we picked him up from the pet sitter on our way back from NYC, we were trying to get Lola’s coat on in the dark. Mr. Judy used his phone as a flashlight, which apparently was shining directly into Bandit’s eyes, and he growled at Mr. Judy.

As I said to my SIL, he’s damaged. We’ve done our best to help heal a lot of that damage, but I don’t think it can ever be completely healed.

If we were enjoying high tea . . .
I’d tell you I finally realized why I struggle so with my weight during the winter. It’s not about my eating; it’s about my activity. I’m just not as active. Sure, I’m still active, but there are many days I can’t walk the dogs, or can’t walk them long due to the temperatures. There are too many times I put off exercising because I don’t want to change, or don’t want to change afterwards because I have to layer up to go outside.

Some of my slothfulness lately has just been about not feeling well and taking it easy until I do feel well (I felt good, then I didn’t, then I did . . .).

So realizing that, what’s a poor frozen northeaster to do? Good question.

Do you struggle with weight and activity in the winter?

Do you have a lot of races scheduled?

Have you ever thought about where you’d like to retire to?

Today I am also  joining up with the  Friday Five 2.0  from Fairytales & Fitness and Rachel @ Running on Happy.