People have been talking so much about 2019 being the close of the decade (or 2020 being the start of a new one). Seems they can’t even agree on when a new decade starts.

So What can Change in a Decade?

A whole lot, it turns out!

Saying Goodbye
There were many losses in the last 10 years: Mr. Judy’s father, my sister’s MIL, 3 furkids (Simba, Chester, Gizmo) –more, of course, but those hit closest to home.

My father had brain surgery, my mother had surgery, and we emptied out my childhood home (and I am still going through their stuff, or my mom is giving me stuff to throw out or donate) . . . then we moved my parents to a senior living community.

Now we’ve moved my Dad into a nursing home. It wasn’t what anyone wanted, but it was just the only option as my Mom could no longer cope with his worsening dementia even with a live in aide.

In the midst of all those losses, we welcomed a new furkid, Bandit, a senior rescue. It got off to an extremely rocky start, and stayed that way for many months, but with time, love, training, and Nutricalm, Bandit found his forever home in our home — his third. Lola had also had multiple homes when we adopted her, but she was still a puppy. She needed a lot of training too, but at least she got along with humans and our other furkids.

The Big Move
We thought we’d retire in TX, we really did. Retiring in TX would also have meant Mr. Judy retiring from working. So we sold our home of 15 years, we packed up all our belongings (in one moving truck! — which included both our cars in addition to our furniture and stuff), and we made two plane trips to bring the boys (the cats) and the dogs to our new home in New York.

I became a Runner
I still kind of don’t know how it happened, but happen it did. Apparently I had started to experiment a bit with running when we lived in TX, but it wasn’t until I moved to NY that I became a Runner.

But I was never going to be a Racer. Oh no, not me. Not this turtle.

I became an occasional Trail Runner/Racer
2017. It feels so long ago. The year of 4 half PRs, including my first trail race (yes, chocolate was involved — as was my shoe coming apart in the last mile or so), my slowest half ever but hey, an automatic PR. Yup, my first trail race was a half marathon — go big or go home, right?

Since then I’ve done a couple of trail 5ks and one trail 10k. My running buddies were not interested in trails when I was training for my half, but last summer they finally decided trail running was cool, so I had some company on the trails for a change.

I haven’t ruled out a future trail half, but so far I mostly stick to road races.

Racing with the Girls
Somehow most of those half marathons (but not all) have involved running friends, bloggers and non bloggers, local and not local. Even when it wasn’t a girls’ trip, somehow almost all our vacations became racecations. 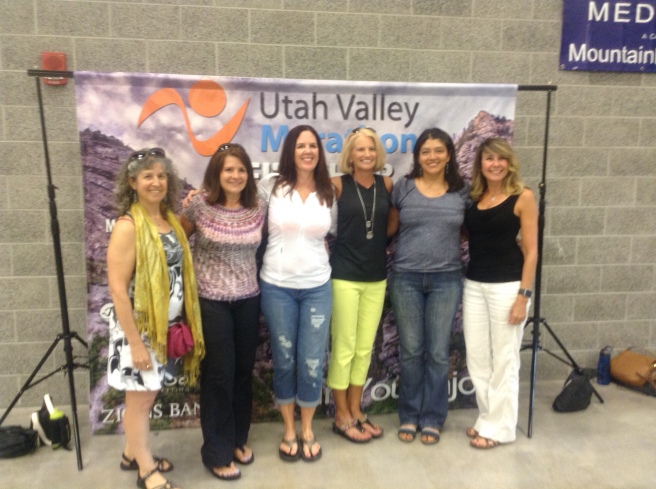 I remembered how much I love hiking
The racecation to UT reminded me that I really love to hike. Moderate day hikes (like not even all day). I’m always looking for hiking wherever we vacation now — and closer to home, too.

I lost the weight
It was the reason I started to run in the first place, to try to get those last 10 pounds off. At first it didn’t help. Eventually, though, after years of plateauing about 10 pounds above my very reasonable goal weight, I lost those 10 lbs. I’ve kept them off, too. At the moment I maintain my weight without even tracking my food, which is something I never thought would happen.

I used good old Weight Watchers. Going to meetings every week. I’ve been a Lifetime member roughly 30 years Although not attending meetings all that time, definitely often not at my goal weight all that time.

I’ve been maintaining that goal weight for about 6 years now. This last time I realized it wasn’t just about what I eat, but what was eating me. I think that’s the difference from all the other times I gained and lost 40 pounds (and yes, there were multiple times in my life that happened).

I became a Yoga Teacher
Like so many things in my life, I couldn’t tell you exactly when I started practicing Yoga, but I can tell you I’ve been practicing it a long time. I wanted to take my Yoga Teacher Training for a long time, at first I thought for my own knowledge; YTT is expensive!

I started a Youtube Channel
Just squeaked in with that one! I believe that Yoga is so beneficial to everybody, and Youtube is a great way to make it accessible to everybody. I wasn’t going to start it this year, but I had things I wanted to share, so I sucked it up and I got it done.

I started this blog
It’s not my first blog. In fact, I’ve been a WordPress user for a very long time. My first blog was in about 2000, although I’m pretty sure that that one at least started with me just coding in HTML. I’ve had previous blogs about my cats, about graphic design, and a really short lived one about cookbooks.

This blog is the first personal blog I’ve had that really found its audience. My previous professional blog about graphic design did quite well, and I managed a large, thriving community of designers and those interested in design.

A decade can definitely change you!
Thank you for walking (or running) down memory lane with me — if you got to the end, you deserve a prize and I thank you for reading!

I can honestly say that I am a different person than I was ten years ago. Some people like to do the same things, year in and year out. Go to the same places for vacations. Live in the same city you were born in. There’s comfort in that, but despite the fact that change can be stressful, I like to change things up.

Jobs, where I live, hobbies, activities, where I travel to — even where I run! I haven’t really worked at one job more than about 10 years, although my stint at About.com (RIP) was a bit more than 10 years, but not by much

Change is the only thing certain in life. Well, death and taxes, I suppose, but aren’t they just changes after all?

What do you thinkwill change for you in the 20s?

What do you wantto change for you in the 20s?

36 thoughts on “What can change in a decade?”